FALL OF CAPITALISM is a comprehensive guide that provides a critical analysis of the current financial crisis in the US and the world at large. It concludes that the current crisis could very well be a sign of failure of the underlying system of capitalism. It shows that the system of capitalism contains serious faults and defects at the core theory level. Through its pages, readers will learn that economic and financial crisis periodically occur whenever these defects are triggered by various conditions and political decisions during the life of capitalism. 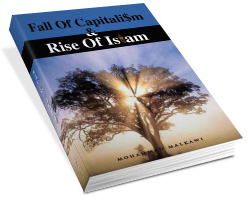 It also takes a close look at the collapse of financial institutions, the crash of the housing market, the evaporation of trillions of dollars, the creation of virtual unreal wealth, and the decline of productivity are symptoms of the potential failure of the ideology of capitalism. This failure has serious impact on the life quality of billions of people around the world who suffer from poverty, hunger, health insecurity, lack of education, and serious inhuman conditions. This book boldly predicts a potential crash and collapse of the world order under the pressure of a failing capitalism.

Read more about the book, its author and order the book from http://fallofcapitalism.com/
Posted by Islamic Revival at Monday, February 28, 2011

Email ThisBlogThis!Share to TwitterShare to FacebookShare to Pinterest
Labels: Economics