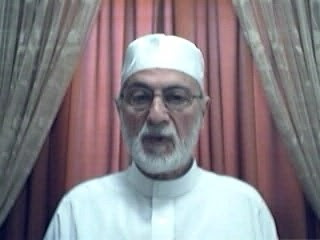 ISLAM DRAFT CONSTITUTION
31 General Rules-1 54m 45s
32 General Rules-2 47m 22s
33 Governing System 47m 29s
34 Caliphate Head-1 52m 29s
35 Caliphate Head-2 52m 31s
36 Caliph's Assistants 46m 23s
37 Valis 33m 40s
38 Judges-1 43m 09s
39 Judges-2 48m 48s
40 Jihad Amir 53m 59s
41 Administration System 44m 07s
42 Ummah's Council 42m 48s
43 Family System in Islam 68m 15s
44 Economy System-1 51m 21s
45 Economy System-2 55m 05s
46 Economy System-3 47m 05s
47 Economy System-4 49m 09s
48 Education System 68m 22s
49 Foreign Policy-1 36m 34s
50 Foreign Policy-2 43m 52s
51 The Commentary and Summary 42m 04s
COMPARATIVE RELIGION
52 Introduction & Preface 20m 05s
53 Religions' Views about God's Role 16m 36s
54 Hinduism, Buddhism, Judaism 22m 13s
55 Christianity 16m 20s
56 Islam 18m 24s
57 Hinduism vs. Buddhism 29m 56s
58 God in Confucianism 27m 09s
59 God in Judaism 16m 05s
60 God in Christianity 16m 37s
61 God in Islam 21m 03s
62 Judaism vs. Christianity vs. Islam 33m 28s
Concluded in mid October 2008
Total Size = 1.078 Gigabyte
Total Length = 36 hours, 2 minutes, 33 seconds
Profile: The Sheikh was born in 1931, descending from the Disciple of the Prophet SAW: Al-Zubeir the son of Al-Awwam, the ancestry of whom meets that of the Prophet SAW at Qusay the son of Kelab: the Master of Quraysh. The aunt of Al-Zubeir was Khadeejah the daughter of Khowayled, his two uncles were Hamza and Al-Abbas, his cousins were Ali (the Caliph) and Jaafer, his father-in-law was Abu Baker (the Caliph), and his son was Abdullah (the Caliph), may Allah SWT be pleased with them all.
While both parents of the Sheikh were Hawarey's, his father Hamed and his only uncle Fares were both martyred during the struggle against colonialism in Sham Lands in 1930's.
The Sheikh joined the Syrian University in Damascus (has been renamed later on to become Damascus University) to graduate with BA in Literature and BA in Education. Later on, he acquired MA and PhD in Comparative Religion and PhD in Tafseer (the unique study of the Holy Quran and its interpretation). While he has published his researches in the field of Comparative Religion as part of his book (Whoever Has A Mind... Must Reflect on These Islamic Researches, in Arabic), his Tafseer research has been published in his book (Call from the Compilation of Rulings, in 2 volumes of 4 parts, in Arabic).
After his graduation from the Syrian University, he spent 30 years in Kuwait, until 1990, working in various fields of professorship, technical and administrative supervision, studies and researches, translation and other intellectual and political activities. During this period, he finished the curriculum of High Diploma in Higher Islamic Studies in Cairo, Egypt. He also authored more than 120 researches in various fields of education, culture, science and communication, in addition to more than one series that were published in Kuwaiti daily and weekly periodicals. Since 1990, he has been living in Sham Lands and has authored multiple books that are advertised on his website all along with the publishers, in Arabic.
Source

By Islamic Revival May 14, 2011
Assalam wa alaikum wa rahmatullah wabarakatahu, Dear Brothers & Sisters, We are saddened to see Muslims today even those who practise many of the rules of Islam are working in jobs which involve haram in the financial sector. They are working in positions which involve usurious (Riba) transactions, insurance, the stock market and the like. Even though many of the clear evidences regarding the severity of the sin of Riba are known, some have justified their job to themselves thinking that they are safe as long as they are not engaged in the actual action of taking or giving Riba. Brothers & Sisters, You should know that the majority of jobs in the financial sector, even the IT jobs in this area are haram (prohibited) as they involve the processing of prohibited contracts. If you work in this sector, do not justify your job to yourself because of the fear of losing your position or having to change your career, fear Allah as he should be feared and consider His law regard
105 comments
Read more