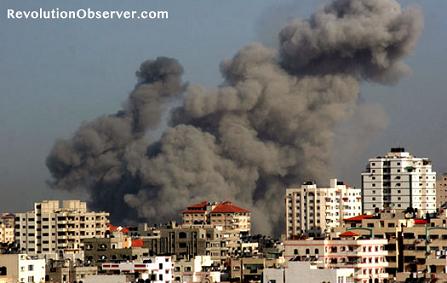 It has been reported by Reuters that Israel has assassinated Hamas’ top military leader, Ahmad al-Jaabari, in Gaza on Wednesday afternoon. Al-Jaabari was the head of Izz el-Deen Al-Qassam, Hamas' military wing. This incident breaks a truce brokered by Egypt between Israel and Hamas reached yesterday.[1] The Israeli government said the assassination and the afterward bombings were in response to rockets launched by Hamas and other militants within the Gaza Strip into Israeli towns. This false allegation has always been used by Israel for their actions, although their track record shows an almost consistent Israeli instigation prior to a retaliation by Gaza. This time, Israeli forces have killed a 12-year boy after they “had entered some 100 to 200 meters (yards) inside Gaza” before any prior provocation by Hamas.[2]

There has been much speculation about what prompted Israel to conduct the assassination and the  attack on Gaza. Some analysts have said that the operation was done out of vengeance for the role al-Jaabari played in the kidnapping of the Israeli soldier Jilad Shalit. It is hard to believe that Israel would launch the attack for this reason alone without having an underlying strategic objective. With the upcoming Israeli elections in January 2013, some analysts have suggested that the Netanyahu government is trying to gain positive PR from the death of a Hamas leader, although targeting such a high profile personality makes this less likely.

The assassination of the head of Hamas' military wing is a declaration of a full scale war with Gaza.Based on Hamas' strategy, they do not want to upset the current balance and incite Israel into a war. However, Hamas has proved that during the years between the last Israeli incursion in 2008, it has rebuilt its weapon inventory with even more sophisticated weapons like anti-tank and shoulder-held anti-aircraft missiles (MANPADs) and longer range rockets.[3] The assault on Gaza will no doubt have effects on the wider region, especially on countries bordering Israel like Jordan and Egypt.