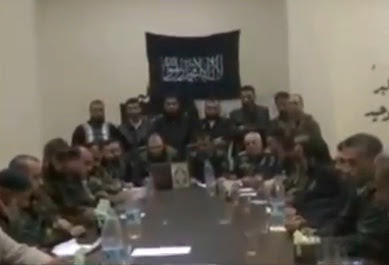 A united pledge issued by ALL the major battalions and brigades fighting in Aleppo, Syria on 18 November 2012. They declare their rejection of the western inspired "Syrian National Coalition" and their support for a just Islamic State.
The full transcript of the pledge is below.
We, the fighter formations on the territory of the city of Aleppo and the entire countryside, being:
- Jubhatu Nussrah
- Kataa'ib Ahrar Sham
- Liwa ut Tawheed
- Ahraar Suria
- Liwa Halab Ash Shahbaa Al Islami
- Haraka Fadjr ul Islammiyya
- Liwa Dur' ul Ummah
- Liwa Anadan
- Kataa'ib ul Islam
- Liwa Jaysh Muhammad
- Liwa un Nasr
- Katiebat Al Baz
- Katiebat as Sultan Muhammad
- Liwa Dara' ul Islam
And others...
Declare that we reject the project called 'The Syrian National Coalition' and that there is unanimity and consensus (between us) on the establishment of a just Islamic state and on the rejection of any external project by coalitions or councils imposed on us from any party whatsoever. Allahu Akbar.