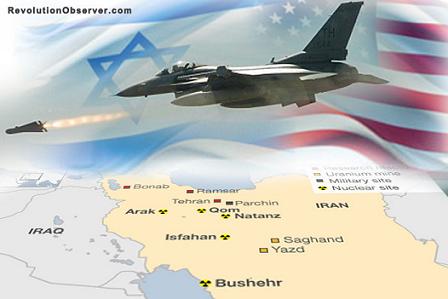 Last Thursday, the Guardian reported that the United States has requested from the British government the use of its military bases in Cyprus, Ascension Island (Atlantic Ocean) and Diego Garcia (Indian Ocean) as part of contingency plan for a possible strike against Iran. This announcement came two days after thebombing of a Sudanese factory through an air strike thought to be led by Israel. The British government said that its attorney general's office considers that such a strike on Iran would be "a clear breach of international law." [1] Iran, in turn, said that the bombing of the Sudanese facility "runs counter to international regulations."[2] The day after, on Friday, Iranian Brig. Gen. Saeed Arablou announced army drills that will start the following Monday describing them as "one of a kind and among the most spectacular drills ever held by the Iranian army."[3]

Israel wants to secure its military advantage in the Middle East and therefore, has a strategic interest in denying Iran a nuclear capability. Due to speculation within the intelligence community that Iran might be closer to building a nuclear device, Israel has been pushing for a strike against Iranian nuclear facilities for the last several months. The Obama administration has firmly rejected such a request and tried to assure the Israelis that sanctions were the right way to pressure Tehran to abandon its nuclear ambitions. In relation with Iran, the US has its own interests to secure that conflict with the desires of Israel. The US public has no appetite for a new war after Iraq and Afghanistan and from a geopolitical perspective, the US benefits from having a somewhat strong Shi'a state Iran, to balance other Sunni powers in the region like Turkey and Saudi Arabia.

Israel has bluffed in striking Iran unilaterally both in 2010 and 2011, which drove some analysts to predict that this time will be no different. Drawing lessons from history is fine, but analyzing today's political situation based on past results is misleading. During most of 2012, the Israelis started again to push the US for a strike against Iran and threatened a unilateral preemptive strike, which "prompted a wave of visits this summer to Israel by several top Obama administration officials."[5] The US realized the seriousness of the Israelis, which prompted them to secretly send a dozen F/A-18 Hornet fighter jet squadron to the Middle East with an unknown destination.[6] The latest reaction was right after the strike at Sudan, presumably by Israel, where the US administration lobbied the UK for air-bases for a contingency plan due to a preemptive strike by Israel. All these actions by the US suggests that the Israelis are serious about a preemptive strike against Iran and will try to drag the US along to face up to Iran.

In their negotiations, the Israelis highballed their initial demand by requesting a joint air strike or otherwise threatened to go alone, but Israel's conviction that it could not  fully destroy the Iranian nuclear program alone and that the US position was firmly opposed to such air strike forced it to settle for less. That was precisely what Netanyahu had asked for in his famous 'presentation' at the UN General Assembly, last September, when he drew a 'red line' on a bomb cartoon requesting that the US sets the 90% completion of Iranian enrichment as a trigger for a military strike.[4] Although from Israel's perspective, this option was a realistic compromise that could satisfy both parties, it was still rejected by the Obama administration, which only promised to not let Iran possess a nuclear weapon.

After Netanhayu failed in obtaining even a 'red-line' declaration from the Obama administration, Israel had to go back to the negotiations’ drawing table. The only way to get the US to change its stance, is for Israel to threaten certain US interests and that explains the continuous push for a unilateral strike against Iran, but for this pressure to work, it has to be genuine and real. That would set the region on an uncertain path of spiraling out of control and would put pressure upon the US to intervene and protect Israel from Iranian retaliation. Due to US public opinion, the Obama administration can not let Iran strike at Israel without US intervention, especially during election time when Obama will be more pressed for votes.

Netanyahu has extended his window of negotiation until next summer saying that Iran would be 90% done building a bomb then, during his UN speech. He signalled his intent on an air-strike to the US by setting a 'War Cabinet' for next year through his Likud party merger with the ultra-right Yisrael Beiteinu.[7] Utilizing a unilateral strike during this crucial week of elections would exert a lot of pressure on the Obama administration to fully protect Israel, which made Obama worried about an 'October surprise' by Israel.[8] This could explain the leak by his administration regarding the joint US/Israeli strike on Iran, which probably is to buy more time for the US until the elections are over.[9] The Israelis are serious about a preemptive strike and the signal from the attack on Sudan has pushed the US to ask the British for military bases to set a contingency plan in case Israel actually follows their words with deeds.